The Diana Fritillary and Me

My father got me interested in butterflies at about age 6. My mom made me a butterfly net from a broom handle, a bent coat hanger and some sheer fabric and off I went. Dad would take me out to special fields and we would have a great time. He got me a thin little Simon and Shuster book on butterflies and moths and it had a picture of a male Diana Fritillary. As I got older, we took butterfly hunting trips further south from Pittsburgh, through West Virginia into Tennessee. We never saw a Diana. Many years later after my father had passed away, I was in the Smoky Mountain National Park and noticed several large peculiar black butterflies on some Joe Pye Weed. They were female Diana Fritillaries! I was stunned and sad that my dad was not there to share this magical moment of discovery. After two or three decades of searching, I had finally seen a Diana! 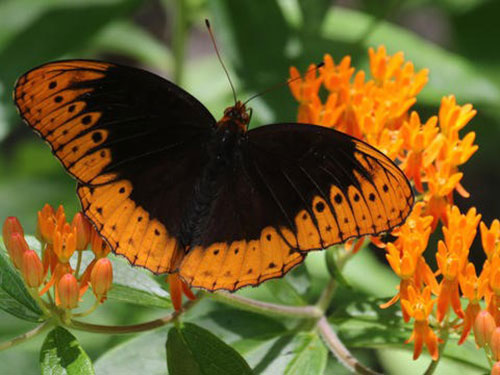 Besides being very beautiful, this butterfly is very mysterious. Males and females look totally different. The male is a deep burgundy brown with bright orange banding and the larger female is black with iridescent blue and white markings. Males and female butterflies don’t fly at the same time of the year. They both emerge in May and mate and then the females disappear. Males fly in May to July. In August and September, males are gone and females are flying and laying eggs down on leaf litter around their food plant, which is Violet. These tiny eggs will hatch and the newly emerged caterpillars will go dormant throughout the winter and begin feeding again in the following spring. To raise these butterflies is an extreme challenge. By this time my collecting days were over but I was fascinated with raising moths and butterflies. 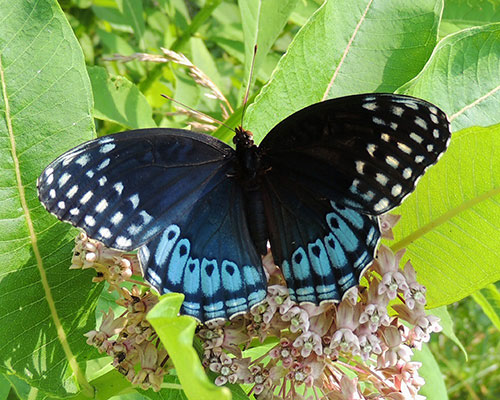 To rear a Diana Fritillary, many problems have to be solved and there are many mistakes that will result in failure. First of all, you must hunt and capture a female in mid September when they are laying eggs. You must keep her fed and content in a box with some fine netting and a violet plant to stimulate her to lay eggs. Many of the eggs she does lay will not hatch. T his is normal as this butterfly lays many eggs. When the eggs hatch, the tiny caterpillars go into immediate dormancy for the winter. Your challenge is not to get them wet, to not let them dry out, and to not let any small predators in to eat them. It doesn’t sound easy and it is very difficult! I tried various methods I had heard and read about but was not successful for the first four years of efforts. On the fifth year, I had a breakthrough and in April I was thrilled to see tiny caterpillars beginning to wake up. I had some pansies, which are in the violet family and the tiny caterpillars began to feed. In the end I had twelve chrysalises and w hen they emerged the splendid butterflies just blew me away. This was before digital cameras and my photos were just not nearly good enough to capture the amazing sight of a freshy hatched Diana. I am determined to try again and to document the whole process!

The Diana Fritillary is found only in the mountains from West Virginia , North Carolina and Tennessee west to Arkansas and Missouri. It is found nowhere else in the world! It is threatened by development of mountain land and loss of habitat.

This butterfly is honored as the state butterfly of Arkansas. Like many of our native butterflies, the Diana will soon be endangered. As habitats change, the butterflies disappear. That would be an unspeakable tragedy.

I have chosen the male Diana Fritillary as my logo and a male Diana is pictured on every one of my oil sticks. It honors the beauty of this great butterfly and the memory of my dad and all he did to promote the hobbies that have enriched my life and gave me countless thrills and memories!